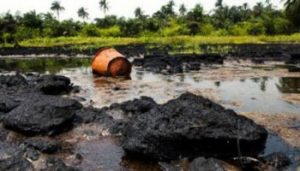 Deputy Governor, Gboribiogha Jonah stated this when he undertook an on-the-spot assessment to ascertain the level of damage caused by recent eruption of the SPDC River Ramos Pipeline In Aghoro Community.

Gboribiogha Jonah also urged spdc to conduct an integrity test on its pipelines in the Niger Delta Region given the frequency of oil spillages from its operations.

Sailing round the creeks of Aghoro and other affected communities in the Ekeremor Council Area Of Bayelsa State are visible signs of crude oil spills on the waters and the land following the eruption of the SPDC pipeline along the Transramos Line which has greatly affected the mainstay of the people.

Bayelsa State Deputy Governor, was not pleased with the delay by SPDC in carrying out remediation activities despite the fact that the incident occured a month ago.

Jonah and other indigenes of the affected areas want the federal government to intervene in alleviating the plight of the people.

Aghoro community has suffered two devastating oil spillages between april and may this year all on the SPDC facilities.